Traditional sanitary bins are washed using a range of chemicals. When they are to be used, sachets, tablets, or powders are often added which provide a masking fragrance and a biocide. This fragrance and biocide is released as a gas but once a sanitary towel is placed in the sanitary bin, this then prevents any gas release and nullifies any fragrance and biocide protection. Binny™ wanted to be more effective, we wanted to also protect the outside of the sanitary bins and wanted our claims to be independently verified. We also wanted to negate the need for tablets or powders to be added. So Binny™ teamed up with Biomaster™.

Binny™ is a patent pending sanitary bin and contains both:

Binny™ sanitary bins have been independently laboratory validated to conform to ISO 20743:2013, and has also been approved for use by infection control teams within the NHS. 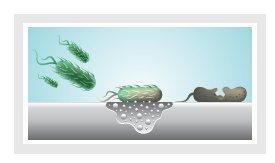 Biomaster™ Antimicrobial Technology is a silver based additive incorporated into Binny™ during manufacture of the sanitary bins. Unlike the gaseous route of powders and tablets used by traditional sanitary bin suppliers, these silver ions  remain integral to Binny™ for its lifetime making it a highly effective and versatile technology. Biomaster™ ensures that Binny™ is fully protected throughout the life of the sanitary bin.

Biomaster™ kills 99.99% of bacteria inside and outside of Binny™ sanitary bins throughout its life, reducing the risk of cross infection. These bacteria include harmful species such as MRSA, E. Coli and Legionella. For further information on Biomaster™ please Click Here.

Choosing the correct combination is a very complex and specialised process as each specific malodour has its own unique chemistry. To produce this specific formulation an external panel of 35 experts was used who measured by trained noses the following:

Machines are unable to decipher the small variations in perceived malodour which is why humans are used. These trained noses work in the same way as food tasters and the experts are tested every 2 months. If they fail the test they are no longer used in this role. As part of this panel testing, many combinations were produced that logically showed promise based on the chemistry of sanitary bin malodours but only one additive gave the effect required and received formal approval from the experts.

The chemical principle in Binny™ sanitary bins is not to mask the odour by over powering the malodour, because as stated above this can cause the perceived malodour to worsen as anyone who has combined baby powder with a baby’s nappy can appreciate. The malodour technology has tailored a unique fragrance combination, which the nose identifies in preference to the malodour found in sanitary bins and therefore the malodour cannot be identified.